06.18.2019 in the Central Court of Chelyabinsk, another hearing was held on the suit of the Prosecutor’s Office of Chelyabinsk Region against the owners of multiple domain names for closing websites containing information related to crypto currency. Alliance Legal CG in this case protects the interests of the social Internet community “pro100business”, in which activities the Central Bank and the Prosecutor’s Office saw the signs of the “financial pyramid”. However, the supervising bodies did not provide any supporting evidence following the results of numerous court sessions.

This situation does not last the first meeting: despite the court’s repeated requests to the Prosecutor’s Office to submit the verification materials, the relevant documents were not received by the court.

Representatives of the prosecutor’s office have so far not provided any explanations on the issue in the interests of which persons exactly the administrative lawsuit was filed.

The fact is that the interested persons are the owners of private offices, including the website www.airbitclub.com, who have acquired digital assets and who have learned about this dispute. They fill appeals to the court, claiming that the Prosecutor's Office is acting contrary to the interests of the owners of digital assets . If the relevant sites are closed, many people will simply be deprived of managing their property.

Despite the fact that the documents of the Central Bank of the Russian Federation allegedly formed the basis of the relevant prosecutor's check, the representatives of the Central Bank of Russia who participated in the court session also could not substantively explain whose interests are violated by placing information about crypto currency services on the Internet and why the claim of the prosecutor's office is actually aimed at violating the right of ownership of the huge number of persons.

The next court hearing on the case will take place on July 22, 2019. Alliance Legal CG in this case protects the interests of Mr. Evgeniy Lebedev, the founder of the "pro100business" social Internet community. Evgeniy turned out to be among the respondents only because, in the opinion of the Prosecutor’s Office, his Internet resource actively acquaints users with the cryptoindustry.

As follows from the lawsuit, the members of this community are users of the international trading platform AirBitClub, well-known in crypto community, giving access to the most popular crypto currency exchanges. In this activity, the Central Bank and the Prosecutor's Office saw signs of the “financial pyramid”. However, the supervising bodies did not provide any supporting evidence following the results of numerous court sessions. 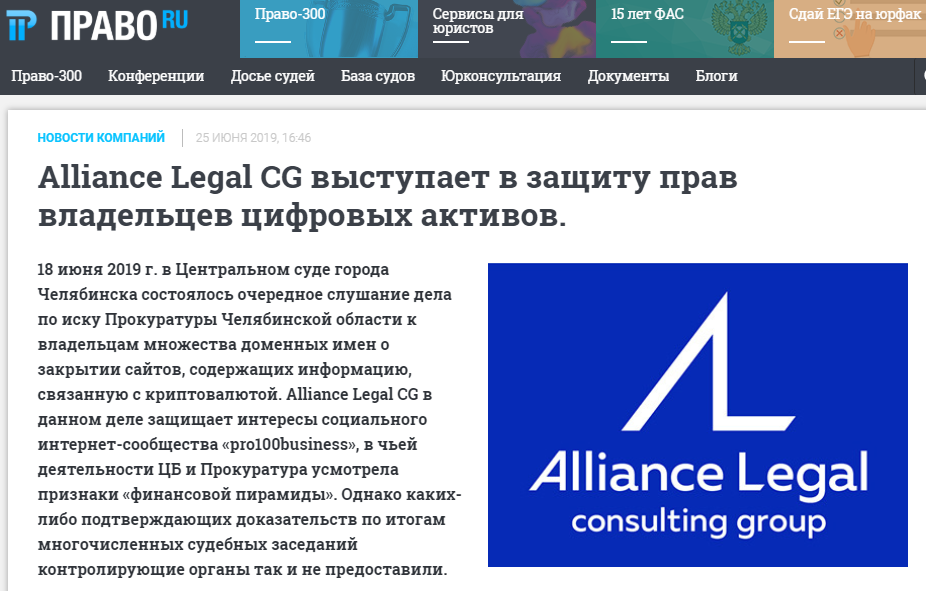